The ink running up and down his arm was sick.
A blooming orange hibiscus at the elbow, stars running up his shoulder, a pirate ship and light house on his inner bicep, and under that, an outline of the Sunshine State.
But it was the two smiling faces on the top of his forearm— one of a kid, the other of a man — that caught my attention.
I pointed at the tattoos and asked my friend Chico who they were. We’d been sitting in my cramped dining room, catching up, as raindrops tapped the roof.
It had been more than six months since I last saw my friend, a single-father, who splits his time being a damn-good mechanic and damn-good musician.
He hadn’t changed much, the good ones never do. But he had longer dreadlocks, a bigger smile, and…new ink, lots of new ink. Half of Chico’s right arm was covered last time I saw him. Now, beautiful killer tats ran down to his wrist.
“That’s my cousin Lawrence,” he smiled, and ran a thumb over the faces. “Died about a year ago.”
Chico explained that both images were the same person, taken from separate photos.
“We grew up together,” he said. “He was like a brother.”
They’d grown up together but had taken different paths in life.

Where Chico was a free-spirited musician, and busy bachelor, taking care of his daughter, Lawrence did everything “by the book”: he graduated from a good college, married his high school sweetheart, got a good-paying job, had two kids, and bought big house. Then he got cancer.
Chico said Lawrence was overweight and having back problems, and that it was affecting his desk job.
After finding a lump on his lower back, he made an appointment with his doctor. Turned out, the bulge was cancerous. The doctor said the source was a blood-clot in his leg — caused (in part) by sitting down at work all day.

I almost spit up the cider I was drinking.
“35?” I said.
Chico nodded.

At that moment, I was so thankful that he had stopped by, so glad he’d shared Lawrence’s story. You need to keep using that stand-up desk, I thought. You need to keep tweaking your habits to find that healthy balance, because this shit is real — sitting down at work all day will kill you. (Graphic courtesy of harvest.tumblr.com) 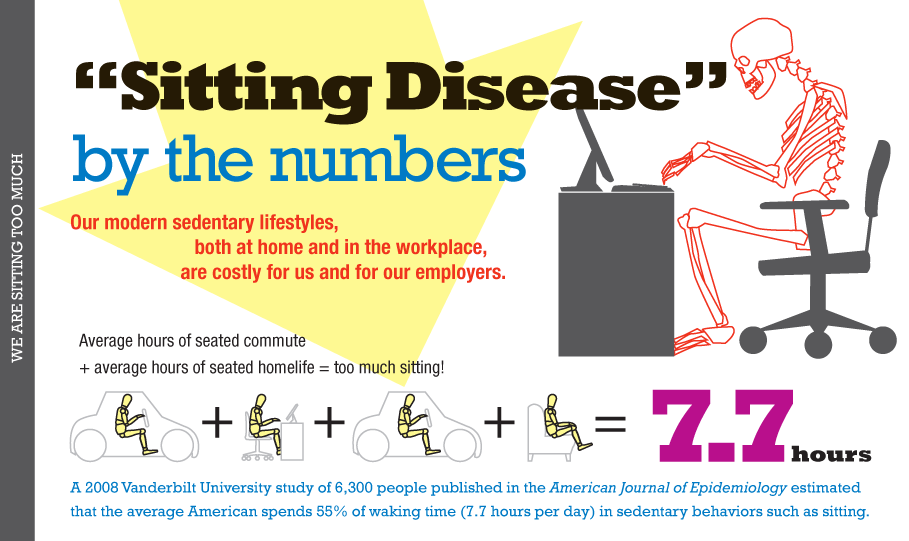 When I came across a CBS.com article recently praising the benefits of the standing desk, at the time it read like marketing copy:

“Experts say working at a stand-up desk all day long can reduce the risk for obesity, type 2 diabetes, cardiovascular disease, and cancer.”

Now, the research was sinking in, piercing the the brain, leaving its mark.
“A study published in the American Journal of Epidemiology and conducted by researchers at the American Cancer Society suggests people who sit for long periods of time have an increased risk of disease and a shorter average life span.”
(Source:CBSNews.com)
Lawrence’s story makes those stats come alive, makes them real. So I think I’m going to keep standing — not all day, of course — with the help of the RiseUp Table Top.
And from now on, whenever I come across articles about standing desks or research on the dangers of sitting all day, I’ll be thinking of the smiling face on Chico’s arm.